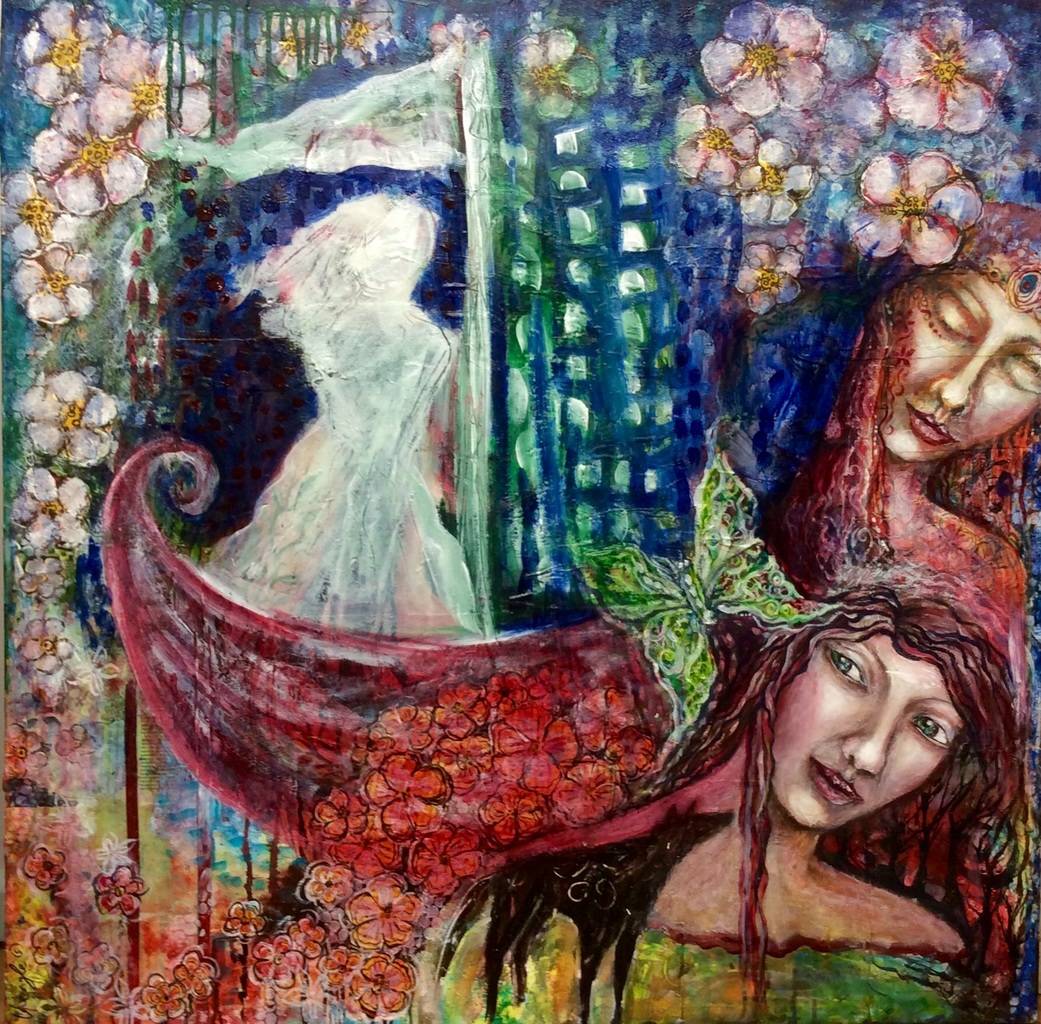 Today was an organising day and deciding where to from here. Pulling out older works, sorting through and making decisions. Inevitably I was drawn to make changes. I have started a series with the central images of a journey boat and a girl. I was lost in the journey…and wandering through all the stories I had shaped. Iof cours then my analytical self wants attention and as I ponder I think about my tendency towards a lack of contrast or crowding an image or the fear of taking something away because as a single element it works but as a whole…

It is time to play and take some creative risks when there are no looming deadlines. So this particular painting called for my attention. I created this painting with 5 women. Each face had aspects I loved but as a complete piece it was not working. The detail was there and I did not want to remove images that I had worked on for so long. I had told myself she was finished but I was not ready to exhibit her in the real world setting although I had shown her online. Funny… The separation of worlds in my head. The concrete space compared to the virtual space I share with you. It would be nice if they would overlap more often.
Anyway, lately I have moved back to my boat symbolism as shown in he previous post. Most of the pieces I am working on are on watercolor paper. This painting decided that it needed a boat and so who am I to argue. It was not easy covering the faces but once I had done it, I was free to play. I drew over the image in yellow chalk to place the potion of the boat and the girl that I could see emerging. I added the boat shape in Quinacridone Crimson an then gessoed in the girl as a simple block. I am using fluid acrylics and allowing layers to show through to add interest and depth to the piece. I then added some fluid viridian green and started playing with covering areas to remove the face and allow some space to breath in the piece. I knew I needed a mask and added this in white gesso. I realised that the boat seemed to curve up into the hair of the girl on the right so I gathered my courage and with anthraquinone blue, I blocked out the girls profile face and added some on the far side of the girl to add contrast and define her shape. I then started adding a grid over some of the gesso dabs I had made. This symbolizes a ladder to me reminding us that there is always a possibility or a choice in directions that we take. This is where I will leave her today. I took a photo on my iPad so I could compare what she looks like now to where I started and consider where I want to go next. The shift in the compositional strength of the piece seems obvious as there is now space to breath. As this is a purely intuitive process and I need to trust the nudging, I do not consciously choose a specific compositional frame but see what emerges. Sometimes I need to tweet the composition. In this case there is a circular motion that the eye takes around the piece. She is not finished but is far stronger now and I plan to work further on her over the next few days.

She is, friend, sister, Float: Original artwork by Cheryle Bannon©.